Why St. Croix Was The Perfect Training Ground for Alexander Hamilton

When I was growing up, kids were not coddled as they are today. We were expected to work and keep busy, and stay out of our parents’ way. And so I lived mostly out of a suitcase as I traveled back and forth between one parent and the other. When it was my father’s turn to “host” me each summer, he would bring me to one of his business associates in St. Thomas and tell them to give me a summer job. This was how I ended up working in important trading firms in Charlotte Amalie and having an employer pay my plane ticket to and from the Virgin Islands each summer to work for him. He saw me as a valuable asset, someone he could train to eventually manage one of his stores. In his employ I learned how to negotiate and sell, I made valuable contacts in the business world, learned how to deal with customs, learned about letters of credit, and chatted with customers in Spanish, French, and English, thus perfecting my language skills. Without realizing it, I had begun my career in international business much the same way that Alexander Hamilton did two hundred years before.

The West Indies, as I see it, was the perfect training ground for cultivating Hamilton's unique talents. In the busy ports of the Danish and Dutch islands, talent and hard work were much more important than family connections. A skilled worker was literally worth gold. One did not need a Harvard education or a family pedigree to grease the wheels of foreign trade. One needed to think fast on one's feet, understand credit, and make valuable contacts. This was the world that Alexander Hamilton grew up in. This was the environment that shaped and molded him into a financial genius, and this was the setting that provided the perfect crucible for turning him into America’s first Treasury Secretary and architect of America’s financial system. None of this would have been possible if he had been raised on a sleepy Virginia plantation or in an abstemious New England household.

While many historians think it is strange that Hamilton grew up as an American "outsider" in the bustling port of St Croix, I see it as natural and logical. The West Indies is one of the few places where a person of no family background or fortune can compete on an even playing field with the children of the rich and famous. It is a place where an intelligent self-starter can rise up to a position of prominence that would be unheard of anywhere else. It is a place where the technocrats mingle with the glitterati on a daily basis. So it makes perfect sense that Hamilton, poor, illegitimate, and orphaned, could have risen to a position of prominence in the firm of Beekman & Cruger. He had the brains, the skill, and the know-how that his employers desperately needed to run their firm. And take over the reins when they were off-island.
As a person of high integrity, Messrs. Beekman, Cruger, and Kortright trusted Hamilton to manage their affairs while they were gone for months at a time. In the thirteen colonies, this would have been unthinkable. Positions of this level of trust were usually reserved for family members. Later, using the skills he learned in the West Indies, Hamilton turned what was essentially a paid apprenticeship into a career of prominence and influence that would ultimately help found a new nation. So, it wasn't just strange that Hamilton came from St. Croix, it was, in many ways, essential. 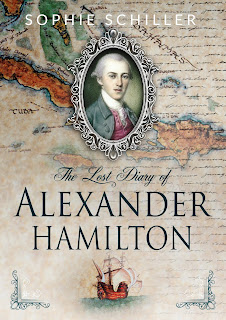 THE LOST DIARY OF ALEXANDER HAMILTON is now available from Amazon. Special prices: $9.00 for paperback and $3.99 for ebook. Order today. 😊😍😂😄

Posted by Sophie Schiller at 3:35 PM No comments: