Heatstroke, exhaustion, motion sickness, insect bites, and having to be escorted off a mountain by gendarmes were just a few of the privations I suffered while researching my latest novel ISLAND ON FIRE on the island of Martinique. To be blunt, conditions were bad—constant 100° temperatures and 99% humidity—but the results MORE than made up for the hardships. What I discovered while exploring the destroyed city of St. Pierre were pieces of the past, evidence of lives suddenly cut short by the cataclysmic eruption of Mount Pelée on May 8th, 1902: a button, shards of pottery, broken porcelain, pieces of exploded bottles, the remnants of a flower pot, a destroyed tea set. The past comes back to life in a terrifying fashion in St. Pierre, Martinique. 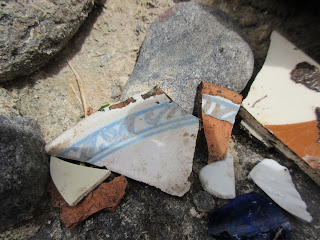 Until May 8th 1902 St. Pierre, Martinique was the most important cultural and administrative city in the French Antilles. It was completely destroyed when Mont Pelée erupted at approximately 8 am that morning, killing 30,000 people in 5 minutes. Today the city has been largely reclaimed, but it will never have the same vibrancy as it had during the turn of the last century.

As I unearthed each item I was well aware that they once belonged to an individual, and that the object played some part in that person’s life. That's the poignancy of discovering the past: you have the chance to connect with someone who lived centuries ago and who died by a catastrophic act of nature. When I discovered that button or those shards of pottery, I was perhaps the first person in over 100 years to touch these items. That's sad given the fate of the people of St. Pierre. When they died they had no way of telling future generations their story. I consider that my mission. I went to St. Pierre in order to tell their story.

I call St. Pierre "the Pompeii of the Americas" because it resembles Pompeii by the cataclysmic nature in which the city was blotted off the face of the earth. Almost like an atomic bomb. The city and all its inhabitants were decimated by the release of the volcano's pyroclastic flows: the theater, the two cathedrals, the fort, the barracks, the jail, the hospital, the warehouses, the chamber of commerce, the lighthouses, the villas, the hotels, the fashionable stores, everything was reduced to rubble in the span of 5 minutes. It wasn't even a question of the citizens outrunning the lava, with the pyroclastic flows traveling at a rate of 500 mph (700 km/hr) and at temperatures of 1,830 degrees F (1000 degrees C) the people were asphyxiated immediately and incinerated within seconds. There was no chance of escape. Also called nuée ardente, a pyroclastic flow is a dense, destructive mass of very hot ash, lava fragments, and gases ejected explosively from a volcano and flowing downslope at great speed. It happened so fast, the residents of St. Pierre had no idea the end would be so violent yet so brief.

As you meander through the ruins, only a few elements of the city’s former life are still visible: a few retaining walls, spigots, iron gates, the remains of fountains and staircases.

The damage was extraordinary, and what is even more surprising is that the ruins have been left largely untouched since 1902. The entire town is a vast archaeological dig. While there, I visited all the major sites where the action of my novel takes place. I would pick a location and dig down only several inches to see what the earth would reveal. In every single case I unearthed something from the past. I will take you on a virtual tour of this extraordinary town that was obliterated by a volcanic explosion, yet has managed to come back from the dead.

My adventure in St. Pierre left me exhilarated and humbled at the same time. It is breathtaking to stumble upon buried objects, yet so humbling to know these people died by an act of God so powerful, so terrifying, that only one person was left to tell the tale. If I learned anything from my experience, it is to never take anything for granted. Especially the gift of life. If a once-beautiful and thriving French town can be reduced to rubble in five minutes, it shows how fragile, precious, and fleeting life is. Perhaps that is the takeaway from St. Pierre: to live each day as if it is your last.

Posted by Sophie Schiller at 6:20 PM