When slaves in the West Indies became ill, or their sense of justice was affronted, they often turned to Voodoo and the magical world of the “Obeah man”. With rituals and black magic, he could restore health and a sense of justice.*

The interrogation records from the police courts are one of the few places to get insights into the enslaved laborers’ own interpretation of events in their lives. That is especially true with the phenomenon of Voodoo (Obeah), which was shrouded in mystery. Obeah, or Obi, are a set of magical or religious practices developed among West African slaves, specifically of Igbo (Nigerian) origin. It existed everywhere the slaves were brought in the New World, and was known by various names, such as Quimbois in the French Antilles, Santeria in the Spanish colonies, and Voodoo or Obeah in Haiti and the British and Danish West Indies. 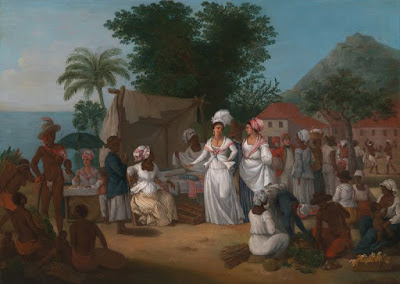 Witchcraft or harmless superstition
Legislation concerning Voodoo or Obeah and how the judicial system would punish the practitioners of it changed gradually during the Colonial era. In the beginning the punishment was severe because Voodoo was considered to be a form of witchcraft and thus dangerous. With time Obeah came to be seen as a harmless superstition, which could however lead to other crimes. In the following example, the enslaved laborer Stephan attempted to take vengeance on the plantation overseer via Obeah. In this particular case, it is evident that the court did not consider Obeah to be on the same level of culpability as with murder or suicide.

Stephan and the Spoiled Rum
Stephan was Bomba (Driver) at Peter Nugent’s plantation on St. Croix. In March of 1781 he was accused in Christiansted Police Court of having ruined the plantation’s rum production. The charges were that Stephan had used Obeah and then attempted to kill his wife and himself in a murder-suicide. The plantation overseer Mansfield testified that the problem started when he punished all the plantation’s slaves for allegedly stealing the planter's turkeys. The collective punishment consisted of confiscating the slaves' personal store of pigs and cattle. At this point, the record indicates that Stephan had become uncooperative. And he let it be known among the other slaves that he would do something to make the overseer disappear from the plantation.

Two other slaves from Nugent’s plantation, Johnno and St. Croix, testified in court that Stephan had sought out an obio (Obeah man) named Melander on General War Commissioner Beverhoudt’s plantation. Stephan had obtained from him an “Obeah bottle” with white contents. Stephan then allegedly spilled the contents into a vessel in which rum was placed for the fermentation process. Afterwards, the rum production was brought to a halt and the entire system had to be cleaned before the overseer would agree to continue the production. At first Stephan denied being guilty of the charge, but acknowledged that  he had fled together with his wife Nancy as soon as the rum production was halted. His defense was that the other slaves were spreading false rumors about his guilt, and he feared the overseer's punishment.

When Stephan and Nancy were found shortly thereafter on the plantation La Princesse, Stephan desperately attempted to cut both his and his wife's throats. That was to avoid punishment, he later confessed. The attempted murder-suicide had failed. Later, in the course of the proceedings, Stephan admitted that he had received an Obeah bottle from Melander and used the contents as the witnesses described. But Melander flatly refused having anything to do with the matter.

Before the case could be concluded it took an unexpected twist. On Thursday, March 15th, 1781, Stephan died while he was imprisoned in Fort Christiansværn in Christiansted. The cause of death is not reported, but the prosecutor presumed that it was due to the wound in the neck. Stephan would have been convicted of having both sabotaged the rum production and attempting to kill his wife and himself. Therefore the court awarded the planter compensation from the government of 170 rigsdaler. Melander was arrested and sentenced to 150 lashes at the stocks for having provided Stephan with the voodoo potion that ruined the rum production.